Posted on February 19, 2014 by Marcel-Jan Krijgsman

Still, I was wondering what kind of session this was going to be. I was hoping the punchline wouldn’t be “and that’s why you need Exadata” all of the time .. like Oracle ..uhm.. occasionally tends to do .. uhm.. yeah. Scratch that.. replace “occasionally” with “fairly often”.

Fortunately Oracle’s Real World Performance Tour is not a session like that at all. Quite the opposite. Andrew, Tom and Graham show you real world performance issues .. on an Exadata machine. Now please don’t say “Performance issues? On an Exadata machine?!” out loud, because someone at Oracle’s marketing department might hear that and you don’t want that. No, the purpose of this day is to show that with bad design decisions you are still able to bring even the fastest machines to their knees. And also that it doesn’t have to be this way.

Even if you’re not running databases on Exadata, the demo’s that are shown might be awfully familliar. For example: the SQL performance demo was amazingly similar to an issue I’m currently working on, including the thinking in solutions instead of trying to find out what we’re actually asking of the database. You also might see familiar bottom-up style solution finding. Hardware first, then (undocumented?) instance parameters and memory. SQL? Design? Meh. Maybe later. Or never, because we’re not supposed to change the code.

Also shown are middleware-database issues. Like what happens when you connect with 9000 threads to the database with a quite active application. On a database with quite a lower number than 9000 CPU cores. Or what issues you’ll see when the application suffers of cursor leaks, session leaks or literal SQLs instead of bind variables.

So expect to learn, but also expect to laugh (in recognition). And take the development team with you. Or the performance project team I’m currently working with. It’s a really worthwhile session even for DBA’s that regularely work on performance issues, like me. 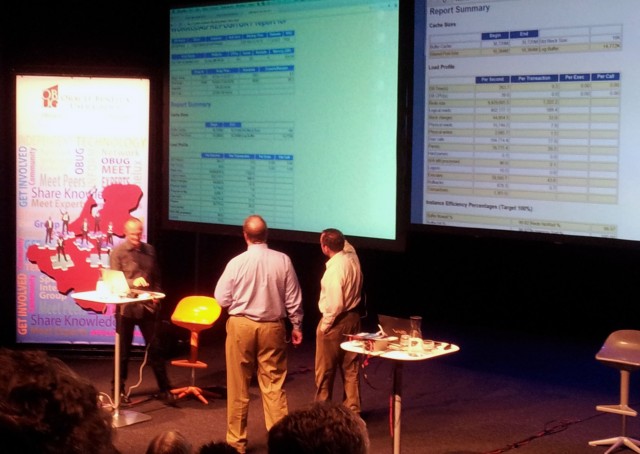 The Real World Performance Tour was only for one day in the Benelux (Netherlands/Belgium/Luxemburg), but the tour continues:

For other dates, I’d recommend to check out Tom Kyte’s blog regularely.